The International Pole and Line Foundation

At IPNLF, we believe in the future of a thriving natural world through empowering sustainable one-by-one fisheries which use pole-and-line, handline and troll fishing methods. By connecting small-scale fishers with the industry and helping them to reduce their environmental impact we help to make sustainable tuna more readily available, protect ecosystems and safeguard the livelihoods of local fishers.

IPNLF’s work to develop, support and promote one-by-one tuna fisheries is subsequently fully aligned with the UN 2030 Agenda for Sustainable Development and the Sustainable Development Goals. We believe effective and equitable global governance is essential to protect and restore the ocean, and this should be achieved by ensuring the participation of local and coastal communities in decision-making processes. 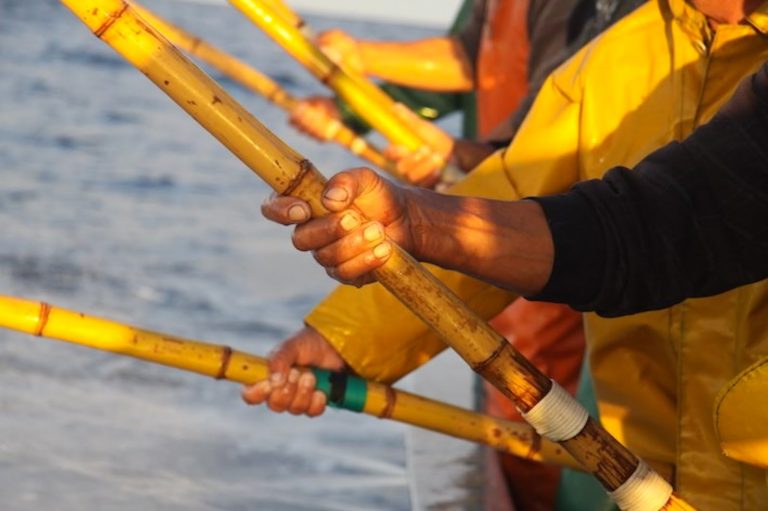 Artisanal fishing methods, like pole-and-line, date back as far as when humans first began to live off the seas. Many coastal communities across the world today retain the same dependency on tuna fishing as their ancestors did and some communities make their fishing poles from the same bamboo material that their ancestors did. This ancient connection means that tuna fishing in many regions is integral to local culture and values, it is their way for life.

The International Pole and Line Foundation was founded as a UK-based charity on the 23rd January, 2012, born out of the need for representation of pole-and-line fishers in the Maldives. It was influenced by this Greenpeace report (2009) which exposed the state of our fisheries and the damage commercial fisheries had committed to our fish stocks, our oceans, and our fishing communities. Therefore, our IPNLF founders set out with a mission: to support one hook, one line, one fish at a time.

What began with a few small-scale, pole-and-line fisheries in the Maldives has grown into a team spanning eight countries, across five continents, and now IPNLF represents fisheries throughout the world. We bring science and tradition together, using our scientific committee (STAC) to forge influential reports that highlight the sustainable, environmental and social benefits of the ancient craft. Our activities vary from practical projects enabling small-scale fishers to implement best practices at sea, to ensuring that the rights and needs of one-by-one fishers are considered in international fisheries management decision-making. IPNLF currently has more than 70 members, representing each node of the supply chain and has been proudly bringing one-by-one caught tuna to your table since 2012.

“The global market demand for pole-and-line caught tuna is soaring as a direct result of environmental organisations increasing consumer awareness of sustainability issues.”

Start of the International Pole and Line Foundation, officially registered in the United Kingdom (Charity 1145586).

One of the first IPNLF publications is released; the best practice for Ensuring Sustainability of Livebait Fish.

Regional branches of IPNLF are founded in the Maldives and Indonesia.

Initial establishment of the STAC (Scientific Advisory Group); an expert group of respected and experienced professionals and academics from around the world, formed to provide advice and governance over IPNLF’s work.

The IPNLF membership base reaches fourteen.

IPNLF releases their first blog discussing their observer programme in the Maldives.

The first hands-on student observation expedition was coordinated by IPNLF for FCTC students; pole-and-line fishers from the Maldives went to Washington state to learn how to fish for albacore tuna. This shared knowledge exchange program between small-scale fisheries is continued through the success of fisher exchanges between the US and the Maldives, and the Maldives and Kenya.

An important Memorandum of Understanding (MOU) was signed between the Ministry of Fisheries and Aquaculture of the Government of the Maldives and IPNLF to continue collaboratively working towards sustainable fisheries.

Together with Indonesia’s Ministry for Regional Development (KPDT) and the Ministry of Marine Affairs and Fisheries (MMAF), IPNLF organised the 3rd International Coastal Tuna Business Forum in Indonesia.

IPNLF releases a new technical report following the research of the Socio-Economic Assessment of Tuna Fisheries in the Maldives, and a new, short, documentary focusing on Improving the Sustainability of livebait fishing practices in the Maldives.

IPNLF launches National Skipper Training Curriculum, for pole-and-line tuna fishers in the Maldives. One year on from the launch of the Fishermen’s Community and Training Centre (FCTC), the pole-and-line skipper curriculum has officially been recognised by the Ministry of Education, making it the first national fishing curriculum in the country.

IPNLF takes a more prominent role in fisheries policy, starting to participate in and advocating for improved management measures on behalf of one-by-one fisheries at the Regional Fisheries Management Organisations (RFMOs)

IPNLF launches their first three-year strategic plan, focusing on the key themes and values that the foundation wishes to place at the core of all of its work.

Martin Purves steps into the role of Managing Director.

In addition to the Fisheries Information System, IPNLF advanced the implementation of the Responsible Fishing Scheme Vessel Improver Programme in the Maldives, and made significant progress in the on-going Fishery Improvement Project in Indonesia.

IPNLF played a crucial role in driving the Indian Ocean Tuna Commission decision to adopt a Harvest Control Rule for skipjack. The initiative is widely recognised as a game changer for global tuna management, alongside ongoing efforts to ensure the fishing pressure is reduced on yellowfin tuna stocks in the region.

IPNLF engaged in the Atlantic and Pacific Ocean Regional Fisheries Management Organisation (RFMO) meetings; and increased collaboration with the NGO community by joining the Conservation Alliance for Seafood Solutions.

IPNLF launched the video ‘Women at the Waterfront’ as part of the Gender Parity in Seafood program and an IPNLF-supported research student from Dalhousie University Marine Management programme began research into the roles of women in Maldivian one-by-one fisheries.

IPNLF co-hosted the inaugural One-by-One Tuna Fisheries Conference with the Azores Government, bringing  over 200 fishery stakeholders together. The conference resulted in the Azores Declaration.

The foundation’s work is recognised with the prestigious Seafood Champion Award for Advocacy.

Launch of the Social Sustainability Manifesto.

Working closely with IPNLF’s partners in the Maldives, IPNLF trials innovative technology such as the bird radar, and took the Fisheries Information System, a data collection and traceability platform, to the next level with a mobile application for fishers.

IPNLF launches new Knowledge Exchange Guidelines to provide a valuable tool for fisheries globally that want to share or acquire skills and expertise to improve their practices.

The IPNLF member network grows from 53 to 65 active companies and associations. The IPNLF work scope expanded geographically to include 22 countries.

IPNLF’s membership network grows to 65, expanding the geographical spread of the network to include 22 countries.

IPNLF’s network reaches some 50,000 fishers in global tuna supply chains, and working with its international partners, maximises the contribution of its network towards the United Nations Sustainable Development Goals (SDGs), known as the ‘2030 Agenda’. The organisation reaches a turnover of £1.11 Million.

IPNLF is granted Observer Status with the United Nations Conference on Trade and Development (UNCTAD).

Together with International Association for Women in the Seafood Industry (WSI), IPNLF initiates the discussion ‘How to consider gender in social responsibility’.

IPNLF’s tireless strategic endeavours over the past year have helped bring crucial progress at RFMO level, including the introduction of a 15-year rebuilding plan for bigeye tuna stocks at ICCAT.

COVID had a considerable impact on the one-by-one sector, its supply chains, and our members.

Development and Launch of the IPNLF Strategic Plan 2020-2025. The 5-year plan is focused on continuing to help drive the sustainable management of the world’s one-by-one tuna fisheries, and focus on cultivating an increased understanding amongst a wider public regarding a holistic approach to “sustainability” – of both looking at the social responsibility as well as the environmental sustainability of sourcing tuna and throughout the supply chain.

IPNLF are co-hosts of the G-16 meeting to review the proposal on the Allocation of Fishing Opportunities for IOTC Species alongside the Government of Oman.

IPNLF’s influence extends as far to membership of EU’s Long-Distance Advisory Council (LDAC), the foundation has gained observer status at all the International Tuna RFMOs, and is a founding member of EU’s Outermost Regions Advisory Council (ORAC, or CC RUP).

IPNLF join forces with the Global Dialogue for Seafood Traceability (GDST) as an industry partner, working toward the first plastic neutral fisheries in the Maldives and the Azores.

The collaborative nature of IPNLF led to important new MOUs in the Maldives with the Maldives Seafood Processors and Exporters Association, Dhivehi Masverin and with the Olive Ridley Project.

The first global digital marketing campaign ‘Choose Your Tuna’ sees 80 celebrity chefs, influential brands, partner eNGOs, global influencers, marine conservation organisations, and even the donor community all playing a part in getting the message out into the world.

Launch of the IPNLF Sourcing Transparency Platform, one of IPNLF’s three initiatives that link into the 5-Year Strategic Plan.

Played a key, supportive role in the adoption of St Helena’s Fisheries Bill to transform their EEZ into a one-by-one tuna fishing zone.

Developed and launched ‘Tuna Tales‘; a series of videos with an award winning Azorean filmmaker to shine a light on one-by-one fishing communities in the Atlantic Ocean which premiered at the first in-person General Assembly of the Eu’s Outermost Regions Advisory Council (CC RUP).

Established best practices and rolled out training to fishers for improved conservation and management of livebait in the Maldives.

Demonstrated plastic neutrality through projects in both the Azores and the Maldivian one-by-one fisheries.

Browse through our most recent documents and reports. You can view all in our Resources.