Achieving the world’s first “plastic neutral” fishery in the Azores

Achieving the world’s first “plastic neutral” fishery in the Azores

The Azores pole-and-line fishery has become the worlds first ‘plastic neutral’ fishery! As part of an annual ghost gear removal competition project in 2021, the fleet have removed more plastic fishing gear from the ocean, by weight, than it lost on an annual basis. 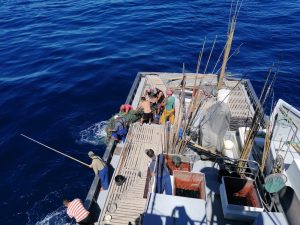 To be “plastic neutral” means to remove as much plastic from an environment as a person, or organisation contributes themselves. Achieving plastic neutrality has become a key goal among organisations around the world, particularly those closely associated with ocean plastics, such as fishing nets and lines. In order to obtain plastic neutral status, the International Pole and Line Foundation (IPNLF), in association with Azores Ocean Observatory (OMA), Azores Fisheries Observer Program (POPA), Associação de Produtores de Atum e Similares dos Açores (APASA), Federação das Pescas dos Açores (FPA) and the Institute of Marine Research (IMAR), developed a model for a ghost gear retrieval competition to be held among the Azores pole-and-line fleet.

POPA have been collecting data on the fishing gear loss rates of the pole-and-line fleet from 2019 until 2021. These findings evidenced that the entire one-by-one fleet only produces a total 0.5 kg of fishing gear related litter on an annual basis. Based on the above, and results of past competitions, IPNLF anticipated that the competition would result in at least 100kg of ghost gear being retrieved, and that the Azores fleet would attain “plastic neutral” status.

The competition ran from June – September 2021 and whilst the COVID-19 pandemic meant this year’s competition was used as a pilot event, it was a great success. 7 vessels of the APASA pole-and-line fleet took part in the 3-month competition. These vessels were advised to collect marine litter that they encountered on fishing trips, with a focus on removing ghost gear. The weight and type of collected debris was recorded by onboard POPA observers who evidenced collections with photographs. Once weighed and recorded, the collected ghost gear was disposed of responsibly through Lotaçor; an Azorean, public owned organisation that supports the fishing sector.

The aim was to collectively remove more plastic than the fleet lost annually, and, to win the competition, to remove the most plastic as a vessel. The winning vessel of the competition was announced on the Azores Day of the Ocean on the 11th of November 2021.

Throughout the 2021 competition, the 7 vessels of the APASA fleet removed 452.1 kg of marine plastic litter. 437.6 kg of this was ghost gear in the form of buoys, nylon cables and multifilament nets. This means that, in 3 months, these vessels retrieved 875 times more ghost gear in weight than they lost annually in their own fishing operations. These vessels have blown any expectations out of the water with this incredible achievement and absolutely smashed their goal to achieve plastic neutrality.

Many lessons were learnt through this pilot competition and areas of improvement for future competitions have been highlighted. However, the event was such a success that the Azores Ghost Gear Retrieval Competition has been confirmed for the next 2 years as a result of the generous support of both Biocoop France and pioneer sustainability brand, Fish4Ever.