IPNLF shines a light on the Canary Islands’ one-by-one tuna fishing industry, its history and the positive impact it has on local communities

The Canary Islands are one of the most popular holiday destinations in the world, located south of the Spanish mainland, and approximately 100 km west of Morocco and Western Sahara. Consisting of seven islands and inhabited by over 2 million people, they are also home to thriving one-by-one tuna fisheries.

Collectively, the Canary Islands catch an average of around over 8,000 tons of tuna per year with one-by-one fishing gear only. The most common species caught are bigeye, albacore, and skipjack. Products from these fisheries are exported to markets all over the world.

In the Canary Islands, approximately 1,700 people directly benefit through employment in fisheries and another 6,800 people and their families rely directly on the fishing industry.

Many cofradías were only formed in the late 70s. While these cofradías are young compared to others in Spain, they have still been influential in securing a one-by-one only tuna fishing zone in the Canary Islands’ 200 nautical mile exclusive economic zone.

Today, the Canary Islands’ tuna fisheries are widely celebrated, and are a historic part of local community culture. In fact, the industry is so highly regarded that tuna festivals can be found on many of the islands!

Two of IPNLF’s Canary Island Members are based on Tenerife and Lanzarote; Islatuna and Optuna No 42, respectively. Representing the majority of the one-by-one tuna fishers on these islands, these producer organisations work to market the fishers’ catch, ensure fair pay to workers, and to influence local and international regulations in order to benefit small-scale fisheries. 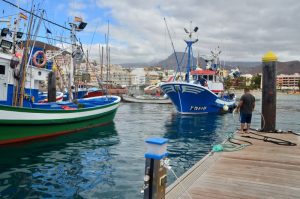 IPNLF also has two Members based on the smallest of the Canary Islands, El Hierro; Cofradía de Pescadores Nuestra Señora de Los Reyes (Cofradía de La Restinga) and Sociedad Cooperativa del Mar Pesca Restinga (PESCARESTINGA). Similarly, these organisations work to strengthen market demand for El Hierro’s catch, to provide administrative support and to facilitate engagement in policy and management issues. In fact, fishers from this stunning island care so much about sustainability they were the driving  force behind the creation of the beautiful and biodiverse La Restinga Marine Reserve – the island’s marine reserve.

IPNLF works with the Canary Island’s one-by-one tuna fishers and fishery representatives to ensure they are heard and understood by relevant decision-makers at meetings such as the International Commission for the Conservation of Atlantic Tunas (ICCAT). Balancing the needs of coastal communities, conservation priorities and industry interests is crucial to ensuring a sustainable and equitable management of tuna fisheries, and IPNLF is proud to partner with the Canary Islands’ fisheries in support of this. 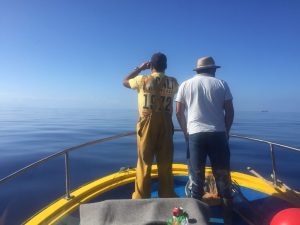 Special thanks To Jose Pascual, University of La Laguna