This year, small-scale tuna fishers in the Azores are taking part in the world’s first competition to remove abandoned floating fishing gear at-sea.

Located at the fringe of the North Atlantic subtropical gyre, the Azores falls within a retention zone for floating ocean plastic, and the majority of this pollution floating into the Azores is fishing gear that has been lost or abandoned by foreign fisheries operating elsewhere in the Atlantic Ocean. Ghost gear threatens almost all marine life in the Azores, such as common dolphins, sperm whales, and each year are visited by loggerhead turtles, blue whales, sei whales and other endangered megafauna.

It is estimated that 10% of the plastic in the ocean comes from lost, abandoned or discarded fishing gear, also referred to as ‘ghost gear’. Ghost gear currently represents one the biggest threats to our ocean, with between 800,000-1.2 million tonnes of ghost gear deposited into the sea annually. Ghost nets, in particular, pose a formidable threat as they are left to drift through international waters, entrapping, suffocating, and killing marine life as they go. Unsurprisingly, abandoned, lost and discarded fishing gear (ALDFG) cause 70% of marine animal entanglements and could be attributed to 30% of the decline of some fish species.

To protect their ocean and the wildlife that local fishing communities depend on, small-scale fishers are taking part in the Azores Ghost Gear Retrieval Competition that runs from June to September 2021. Small-scale pole-and-line fishers in the Azores contribute a minute amount of plastic pollution and yet, these are the individuals stepping forward to make a difference and retrieve fishing gear lost and discarded by large industrial vessels. Competing fishers are encouraged to collect ghost gear and bring it back to shore.  The collected ghost gear will be landed onshore, weighed and responsibly disposed of by in-country project partners. The fishers who retrieve the most gear will be declared the winners on the Azores day of the Ocean on the 11th of November 2021.

Due to the global pandemic, this year’s Azores Ghost Gear Competition functions as a pilot in a series in which 6-12 boats are competing for a four-month period. Through the generous support of both Biocoop France and pioneer sustainability brand, Fish4Ever, this competition will be the first in a series of three annual competitions taking place until 2023. Partners coordinating the competition; the Azores Ocean Observatory (OMA), the Azores Fisheries Observer Programme (POPA), and the International Pole & Line Foundation (IPNLF), are hopeful that this competition will ultimately incentivise Azorean pole-and-line fishing vessels to remove more plastic ghost gear by weight from the sea than the total annual input of the Azores pole-and-line fleet. On the first day of the competition, around 500 kg of fishing gear was removed from the Ocean, including nets, cables and buoys. 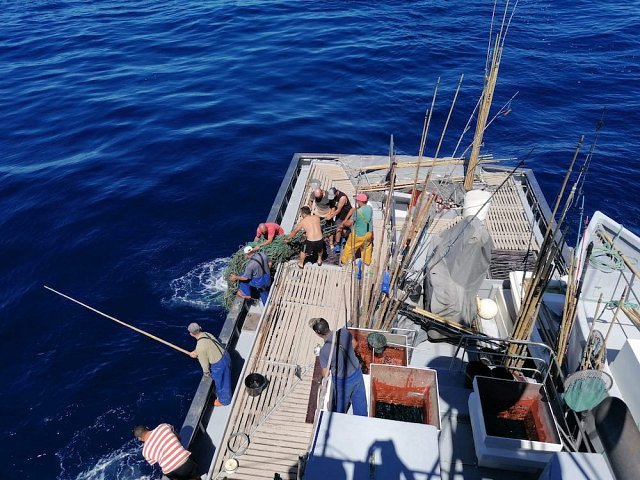 (Photo above taken on the first day – Rodrigo Correia ©️POPA)

“The pilot project happening this year will be particularly important to highlight the role fishers can play in driving improved environmental practices at-sea and helping tackle environmental issues such as ghost fishing. With this years pilot competition, we hope that we can create awareness of ghost fishing issues amongst Azorean Tuna Fishers, and evidence that our model of collecting fishing gear out at sea is replicable, and can be successfully extended to the entire Tuna Fishing Fleet in future competitions”

“It is essential that we support initiatives such as this competition in order to protect marine life and ocean habitats from the threats of plastic pollution. The Azores pole-and-line fishery has shown it has one of the lowest plastic footprints of any fishery in the world, and will now go the extra mile to collect harmful forms of ghost gear that float into the Azores from outside their national waters. We hope these competitions will help raise awareness of how some fisheries can be actively involved in safeguarding the environment, and encourage consumers to support these fisheries accordingly”

“We have been working with in-country partners in the Azores on ghost fishing issues since 2019, and it’s amazing to now see this work culminate into this novel pilot competition taking place during this year’s fishing season.  We see this as a great step forward to creating more awareness on the global issue of ghost gear and we applaud all the fishers in the Azores involved in cleaning up after these irresponsible polluting fishing fleets”

Stay updated on the progress of the competition, find out who the winners are and how much gear was retrieved via IPNLF’s Facebook, Twitter, and Instagram channels.