Following collaborative engagements within the Producers Working Group of the UN Food Systems Summit (UNFSS), the World Farmers’ Organisation (WFO) and the International Pole & Line Foundation (IPNLF) announced today to have joined their forces in a strategic partnership in the framework of the “THE CLIMAKERS – Farmers Driven Climate Change Agenda“, promoting a reversed paradigm where farmers & fishers lead the global political process on climate change, through a renewed agenda that is farmer & fisher-driven, science-based and result-oriented.

Both organisations recognise farmers, fishers, and all food producers’ critical role in driving the transition towards sustainable and climate-resilient food systems. They share a deep commitment to enhancing food producer organisations’ voices, representation, and participation as essential stakeholders of the global political debate on agriculture and fisheries issues.

“We launched THE CLIMAKERS, with the idea to identify, share and implement best practices farmer-to-farmer. That is why we partner up with every other food producers’ organisation we can find on this planet, covering all farming systems and including fishers. There is a lot to exchange and learn from each other,” said WFO President Theo de Jager. “Food producers and wild harvesters’ voices must be represented in decision-making processes that may impact the global agricultural and fisheries sectors, as well as in the Nationally- Determined Contributions for the implementation of the Paris Agreement. If we don’t approach the impact of climate change in the food sector as a team, we cannot really make a change in the global political debate on food production and climate change.”

WFO and IPNLF have jointly worked within the specific mechanism for producers’ representation at the UN 2021 Food Systems Summit and signed the Food Producers’ Declaration at the UNFSS, a joint declaration to reiterate that farmers, fishers, and all food producers are the solution to the achievement of sustainable food systems.

“It is absolutely logical and unavoidable that we facilitate more dialogue with, and raise the collective voice of all food producers as we transform global food systems to align with the SDGs and sustainably feed the growing global human population,” said IPNLF Fisheries Director, Roy Bealey. “Food producers operate daily on the land and water, developing an intimate knowledge of the foundations of global food productions systems while facing the direst consequences from climate change and inequitable trade systems. Fishers and farmers are perfectly positioned to drive the global food system narrative into a more positive direction if only they are suitably empowered to do so.”

This partnership represents the beginning of a fruitful joint path between WFO and IPNLF, towards the mutual goal of strengthening the position of farmers and fishers in the global political discussions on climate change and promoting their critical role as they represent the only possible solution to the environmental crisis. 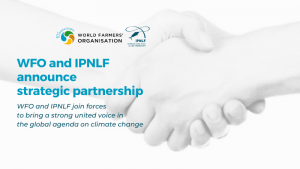 The WFO mission is to bring the farmers’ voice into the global political dialogue on agriculture, advocating for their interests in all relevant international processes affecting their present and future.

IPNLF’s work to develop, support and promote one-by-one tuna fisheries is subsequently fully aligned with the 2030 Agenda for Sustainable Development. Supporting tuna that is responsibly caught can have powerful economic, social and environmental benefits: We believe effective and equitable global governance is essential to protect and restore the ocean, and this should be achieved by ensuring the participation of local and coastal communities in decision-making processes.