The Azores tuna fishery leads the industry by cleaning the ocean, removing more than 1000 times more plastic from the ocean than lost through their own operations.

In the inaugural Plastic Neutral Project in 2021, the Azores pole-and-line fishery became the world’s first ‘plastic neutral’ fishery. This year, the Azorean pole-and-line fleet rose again to the challenge and was not only able to maintain its “plastic neutral” status, but did so with 56% of the fleet participating in the 2022 competition, collecting 620.65 kg of marine plastic, thus removing 1,241 times more plastic than the amount this fishery lost through its own operations.

Plastic pollution is a huge threat to our oceans where plastic litters our coastlines, entangling endangered animals and threatening sensitive marine habitats. When broken down to small enough pieces, ocean plastic is ingested by wildlife and accumulates up the food chain all the way to humans. In total, around 14 million tons of plastic are disposed of at sea every year and the nature of plastic means that it can take decades, even centuries, to fully degrade. Therefore, almost all of the plastic ever created still exists somewhere today, even in dynamic environments like the ocean. When left at sea, plastics can drift for thousands of miles until they are removed. This means that, as well as spreading diseases and contributing to the invasion of alien species to an environment, they will regularly enter the waters of those who did not cause the pollution.

The oceans are in a crisis due to climate change, overfishing, pollution, and the destruction of marine habitats. These problems are caused by human actions and only we can reverse this situation. Everyone is responsible and each, even small action is fundamental to create change.

We don’t talk about it enough, but fishing gear makes up a significant amount of oceanic plastic and, worse still, is the most harmful for the marine environment. When abandoned, lost or discarded at sea, fishing gear becomes known as ‘ghost gear’, drifting aimlessly at sea, entrapping animals and snagging on sensitive habitats until removed. A groundbreaking report was released in 2019 that revealed the extent of the problem: 86% of the large plastics that make up the Great Pacific Garbage Patch are fishing nets, and 85% of the plastic pollution on sea mounts, ocean ridges, and the sea floor is fishing equipment. Buoys alone make up 58% of all large plastics floating on the ocean’s surface. 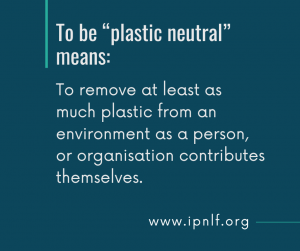 In response to this problem, in 2019, the International Pole and Line Foundation (IPNLF), the Azores Fisheries Observer Program (POPA) and the Institute of Marine Research (IMAR) started working together to research how much plastic and fishing gear the pole-and-line tuna fishery annually loses. Based on information collected by POPA fisheries observers they found that one-by-one tuna fisheries create very little plastic pollution, in fact, it is a negligible amount by weight in comparison with large industrial fisheries. These findings evidenced that the entire one-by-one fleet only produces a total 0.5 kg of fishing gear related litter on an annual basis.

Working together with Sea Observatory of the Azores (OMA), POPA, IMAR, Associação de Produtores de Atum e Similares dos Açores (APASA), Federação das Pescas dos Açores (FPA), and funded by Fish4ever and Biocoop France, the Plastic Neutrality Project was initiated, whereby three annual Ghost Gear Removal Competitions would be coordinated in the Azores from 2021-2023. These competitions involve working collaboratively with the Azores regional pole-and-line fleet to remove floating ghost gear encountered at-sea, land it ashore, and safely dispose of it through local waste management systems. The end-goal of the competitions is to ensure that the pole-and-line fleet collect a total amount of ghost gear by weight that far exceeds the contribution of the fleet through its own fishing operations.

In this year’s Ghost Gear Removal Competition, out of the 735kg of marine litter collected, 620.65 kg of this amount was confirmed to be fishing gear.

The four types of fishing gear related items that were collected were:

As a result of these efforts the pole-and-line fishery achieved plastic neutral status for the fishing season of 2022.

In comparison to the 2021 competition, which occurred during the end of the pandemic, this 2022 competition was coordinated with very little difficulty. Incorporating improvement points from the previous competition, the competition this year also saw a higher number of vessels participating and a much larger amount of ghost gear retrieved. These achievements by the Azores fleet far surpass plastic neutrality and as this series of competitions approaches its 2023 component, IPNLF has no doubt that we can ensure the final competition is the most impactful of the three.

On the project, Carla Damaso, Presidente da Direcçao OMA says: “This second year of the competition showed the dedication of Azorean tuna fishers and their important role in driving improved environmental practices at-sea and helping tackle environmental issues such as ghost fishing. The competition is creating awareness of ghost fishing issues and it’s clear that we’ve now developed a model of collecting fishing gear out at sea that can extend successfully throughout the entire tuna fleet of the Azores and can be replicated by other fleets across the globe”

Charles Redfern, Managing Director, Fish4Ever says;“It is essential that we support initiatives such as this competition in order to protect marine life and ocean habitats from the threats of plastic pollution. Through attaining plastic neutral status for two years running, the Azores pole-and-line fishery has shown it has the lowest plastic footprints of any fishery in the world. We could do so much more in terms of positive impact and support of exemplary fisheries like this if we were able to get more traction in the marketplace where the end products sell and so it helps us so much to have pro-active consumers and especially retailers supporting these great stories.”